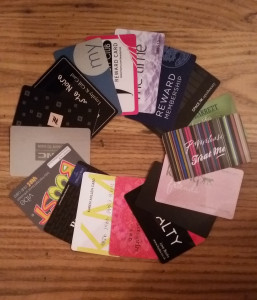 A well known brand launched a new loyalty scheme a few weeks ago. I bought some food items recently in this store. When I looked at the receipt, it told me how many loyalty points I could have earned. I felt slightly annoyed that the cashier had not pointed this out to me at the time so that I could have opened a card to earn the points. Once I got home, I looked at the store’s website and found out that I would need to go into a store in order to get a loyalty card.

I was passing a different branch of the store earlier this week and so I decided to go in and pick up a card. I waited for five minutes in a queue at the till point. Once I reached the counter, the staff member told me that I would need to go over to the food department to find someone with an iPad. There was no apology for my wait. I found it quite irritating that there had not been any signs to tell me where to sign up. I would have expected the procedure to be better organised, considering the scale of the launch on this loyalty scheme. I couldn’t see anyone with an iPad, so I waited at the Customer Services desk. There were four staff members standing around discussing some issue among themselves. After waiting for a few minutes without being acknowledged, I decided to tell one of them that I was waiting to pick up a loyalty card.

The staff member was very helpful and obliging. She led me into a small office and offered me a seat on a dingy looking chair. It felt a bit odd to be sitting in what was clearly a staff office. While I was in the office, another staff member came in and interrupted my meeting. Without excusing herself to me, she asked the staff member who was assisting me if she could help somebody else sign up for the loyalty scheme. It all seemed highly unprofessional. The staff member who had been assisting me seemed slightly annoyed by the interruption from her colleague and explained that there were no iPads working and so she would have to serve the next customer once she had finished signing me up. It seemed very odd to me that there was no way to sign up for this scheme other than to sit in this strange cubby hole sized office. I had to tell the staff member all of my personal details including my date of birth. I did not feel confident that my data was being dealt with in a secure manner.

What can we learn from this scenario? I have seen this time and time again. A company comes up with a great idea, in this case a loyalty scheme. However there are not sufficient staff in place to implement the scheme and on top of this, the staff are not well trained enough to deal with customers who want to sign up to the scheme. I came across a similar example a few weeks ago. A large organisation had been looking at plans to improve their complaints system. They were spending thousands of pounds on working out how to structure their automated switchboard and website contact forms in order to make the process more pleasant for their customers. I had to make the point that all of those plans would be wasted unless they made sure that their staff were sufficiently trained and had the relevant knowledge to answer the complaints that were being made. The same company had been highlighted by Which? last year as having staff without sufficient knowledge on certain key issues. It is no good having a switchboard that is easy to use if the staff member who eventually answers the call doesn’t listen properly and has to ask a customer to repeat themselves several times. Look at the bigger picture!

2 thoughts on “Customer Service Versus Marketing”