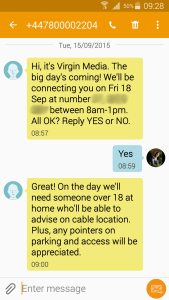 If you had arranged to go and visit a friend, would you text them three days prior to say, ”Hi, the big day’s coming!”? Neither would I. Nevertheless, this is exactly what Virgin Media did to me.  I had arranged for them to add a landline to the broadband package that I already had with them.  They sent me the following message to confirm my appointment: “Hi, it’s Virgin Media. The big day’s coming!”  First of all, do they really think my life is so dull that having Virgin Media to visit would make it my “big day”?  If it was an event such as my wedding, moving house, having a baby, then, yes, this could be called a “big day”.  Virgin Media’s pending arrival – no.

Most businesses know that it is important to make their customers feel valued.  Virgin Media seem to have decided to turn it around and do the exact opposite!  They are trying to TELL me that I should be excited about THEM.  I found their tone quite self indulgent.

Nevertheless I replied to their message to reconfirm the appointment. 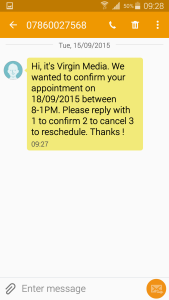 The whole thing became even more irritating as half an hour later, I received another text from another Virgin Media mobile number again asking me to confirm that the appointment was to go ahead.  So what was the point of the first message?  Did they not receive my reply?  I certainly was not feeling very positive about my so-called “big day” after all that.

Make sure you show your customers that you appreciate them.  Don’t try to force them into believing that you are the best thing that has ever happened to them!